Standard Wallet versus Hidden Wallet & How to Get Back to Standard?

Looking at a pretty straightforward situation here but I certainly could use some guidance to ensure that I don’t make an irreversible error. The information that follows will be to the best of my knowledge and record keeping. I am weary about wiping the device and hope to avoid it if it is not necessary. Thx in advance.

When setting up the Trezor One, I chose the standard wallet option. I have the seed phrase, the PIN, and the passcode. There is no concern about the seed phrase, the PIN, or the pass phrase upon setup. Everything was properly written down, and the visibility option was used to visually confirm my passcode. It was also confirmed on the Trezor when promoted. I believe the device was set up properly.

I successfully sent a nominal deposit from a hot wallet to test the Trezor and the transaction was confirmed. A second, larger deposit was initiated and confirmed as well from both, the hot wallet on the mobile and on the dashboard of the Trezor Suite. All was swell.

The next day I opted for a third deposit from the hot wallet to the Trezor. And here is where things got a little tricky. I’ve laid the facts out the best as I can recall and the following statements are the things I believe to be true.

The following day I opted for yet another transaction. To the best of my recollection I opened the Trezor Suite, attempted to follow the prompts to access the dashboard…. I received 2 notifications that the password was incorrect. Somewhat flustered with my fat fingers, I tried a third time with the pass phrase and it opened the dashboard (to what I would later conclude was a hidden wallet). Being rather unfamiliar with the Trezor Suite Dashboard my primary focus was on generating an appropriate address from the Trezor and entering it manually into the hot wallet to make the transfer of funds. Again, a small transaction, followed by a larger transaction. Both confirmed. Easy Peasy…. But wait…

At this time I started looking for the previous day’s transactions and/or balance to no avail. It simply was not there. It was at this time I started to do a deeper dive into the pass phrase, the significance of a typo as each attempt creates a new environment on the wallet, and that standard wallet and hidden wallet cannot be opened simultaneously on the Trezor. It was at this point in time when a little fear set in. “ What did or didn’t I do?” was the question. “ Where are the funds from the previous day?”

I confirmed the addresses that hold the BTC from the first day using a blockchain explorer. The funds are there.

The initial transactions the previous day were conducted in a standard wallet - with a passcode that I presumably toggled on at some point during set up and then utilized. (I suppose I could have started with a hidden wallet, but I remember not wanting to bite off more than I could chew - so I chose standard when setting up.)

Note: Now if indeed toggling the passcode on a standard wallet renders the wallet hidden - or vice versa - then let me add that this is where the semantics start confusing people and it becomes really counterintuitive. I truly hope that I am simply a little confused - because that happens…. Still, For a tech industry that wants to go mainstream with the public - I’m going to request the KISS method for new users. (Even allowing for a passcode to be created that creates new environments given any typo is extremely significant and should be placed bold-faced front and center for all new users to see and verify that they understand this very important and somewhat unique fact before any funds are transacted.). This statement summarizes the focal point of my complaint if I have one, my frustration, or let’s just say the unwarranted fear, if it turns out I actually have a complaint to formally gripe about.

Now I need to locate the standard wallet that holds the previous transactions. Wiping the device seems straightforward enough, but I don’t know what that actually does or what data it erases. I would like to proceed using my original seed phrase, PIN, and pass phrase as required to open the standard wallet and continue on a little wiser regarding pass phrase typos on my Trezor,

I thought I might uninstall and then reinstall the Trezor Suite, hoping it will ask for the PIN and pass phrase. Perhaps this is the best way. I hope so.

If I must wipe the Trezor… Doesn’t that mean I wipe the PIN, the Seed Phrase, and the BTC too? I am not suggesting I could wipe the coins, but I could wipe access to them, no?

In a worst case scenario, I would have to try different iterations of the pass phrase (case, character, etc) to gain access to the initial (now hidden?) wallet if I did not set it up correctly (i.e. what I wrote down was inaccurate but similar).

Sorry folks, that’s a lot of information. I don’t know how to clarify what occurred with less text. I do hope someone will champion the cause here because I want a sound money supply too. I’m willing to go the distance on the tech, even if I do it poorly at first, to break away from central banking. Please lend me your thoughts and a stepped approach to course correct my access to the standard wallet.

Now I need to locate the standard wallet 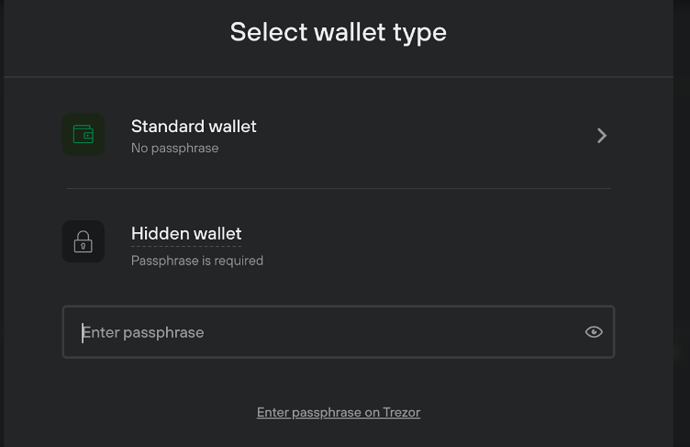 if your funds are not there, you sent them to a hidden wallet 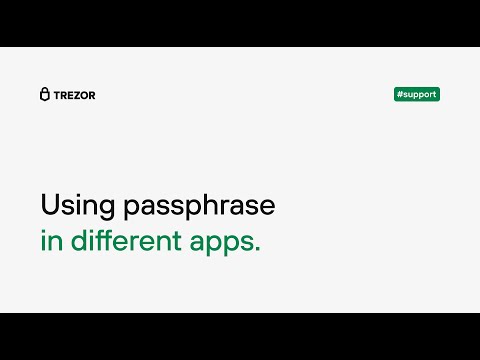 Hey! Thanks for the speedy reply @forgi!

Would it be prudent to attempt to add a standard wallet using all of my credentials? I think so, if it will let me. I do not recall creating the hidden wallet initially. Perhaps I used a setting that forced into hidden mode. It’s perplexing.

Thanks for the reply!

Let me rephrase the question. At the “Wallets” window prompt, I want to Add a wallet and use the credentials I already have on file. That sounds like what you would have me do. The action of entering passphrase credentials takes the wallet to a hidden state, regardless if it was set up as a standard or hidden wallet. By entering the credentials on file, if correct, should bring up the original transactions from the first day and the remaining balance.

I sure hope that’s right, or I’ll be doing a process of elimination on passphrase typos with the local scout troop to find my wallet. If that’s indeed the case, I suspect on the bright side is that I have plenty of time- because the funds aren’t going anywhere.

I really appreciate the Trezor Community. Thanks Again. Hit me back if it sounds like I’m on track. I’d prefer not to complicate things.

just unplug Trezor, plug it back in and you will see the window I posted above, then select standard wallet.

Anything you put in as passphrase creates a hidden wallet, standard one is always without passphrase.

BINGO! Indeed it was set up as a Standard Wallet and converted into a hidden wallet with the passcode. I am wiser for the wear. After plugging in the Trezor, I selected to create a new Standard Wallet, without a passcode. No joy.

I then opted to create another Standard Wallet with my passcode (converting it into the access I needed to pull up my original Standard (then converted to Hidden with passcode) Wallet.

What an important lesson.

I would like to suggest to Trezor that such an important piece of the tech, with the potential for typos and potentially disastrous results is defined more clearly during the set up process. Not everyone will be smart enough to find a forum and get the necessary reply to work through the issue. Better not to get into the mud from the outset.

I suppose I’ll transfer the balance from the hot wallet back to my Trezor with a renewed sense of confidence. The exchanges and hot wallet connection make me a wee nervous for larger balances.

Thanks to the forum.Trezor.oi community and to @forgi Peace be with you.

PS: Any newb that has an issue like this and needs a hand, you can contact me @Zoofactory and I’ll do what I can to help now that I understand the lay of the land.

Make it a great day!