3.2 BTC was stolen from my trezor wallet today

Bought a Trezor model t.
I approached the purchase responsibly. I went to the Trezor website, found Russia in the list of official dealers. I clicked on the site cryptonist
Paid, bought, received.

Unboxing, everything according to the instructions … even stricter! I bought a macbook in the store new for this purpose. Virgin poppy. I inserted a trezor into it, typed trezor.io/start in the browser line as written in the instructions.
I downloaded the trezor suite application, as written in the instructions.
Created a seed of 12 words. I wrote down the seed on paper. I hid the paper in the safe. The safe is in a room that only I have access to. Plus security alarm.
When I created the seed, I did it in a room without cameras, windows, friends, sober, etc.

Finally started using the wallet. It was a month and a half ago. I immediately threw 2 bitcoins on it and set the settings on the pools (yes, I’m a miner, I forgot to say) so that the daily revenue falls on the Trezor too (we don’t trust exchanges). And now a month and a half has passed. I’ve been checking Trezor every couple of three days all this time, daily transactions have been accumulating, everything is fine, but this morning 3.2 bitcoins were stolen from me.

It’s been 14 hours since this incident. Money money … God bless him. Let’s try to find the reason. How did that money disappear?

The bits were stolen in the morning.
Five hours after the theft, the wallet received a transaction from the pool (daily revenue).
See what I mean:

12:00 a transaction from the pool comes to the wallet plus 0.04 bitcoins. Wallet balance is positive.

And to this day, it remains in the black by 0.4 bitcoin.
Only here is the problem. I can’t withdraw this money!
When I try to make a transaction from Trezor in the amount of 0.4 bitcoins, my wallet gives me an error.

In the technical support of criptonist(where I bought the wallet) they shrug.
Naturally, the first version is that I compromised the seed phrase.

I will immediately describe in great detail why this is not possible:

I don’t think it’s possible. All precautions have been taken. Stricter than instructed. From the moment of birth, the seed exists in a single copy on a piece of paper and has not shone anywhere. It was not filmed with a random security or web camera at the time of creation, was not photographed on a phone, was not saved on a digital medium in any form (flash drive, text document, system administrator’s brain), did not fall into the field of view of living people except me. Even today, when I took out this piece of paper, I experienced difficulties in extracting it from the burial place. It was impossible to steal it and put it back, if you suddenly thought about it.

So help me find where I went wrong (besides choosing Trezor, gentlemen)

And the second question: why can’t I withdraw money from the wallet that turned out to be there after the hackers worked there (didn’t forget? the wallet gives an error)

P.S. I am attaching two proofs to this text.

PROOF NUMBER ONE THIS IS THE REFERENCE TO THE TRANSITION FOR WHICH I WERE ROBBED:

PROOF NUMBER TWO THIS IS A PHOTO OF THE ERROR THAT THE WALLET GIVES ME WHEN I TRY TO WITHDRAW MY UNSTOLEN BALANCES FROM IT. 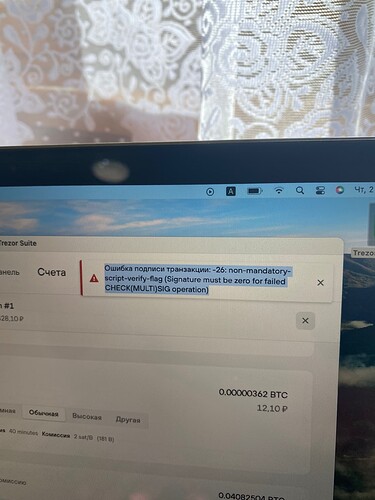 Hi Vinni, please open a ticket here, so we can have a closer look (some sensitive info will be required): https://trezor.io/support/technical/issue/

Can you tell the end of your story or if you know how the loss was?